Legend has it that San Martino became a monk after serving as a Roman soldier.  On a cold rainy day in  November, Martino was traveling on horseback, and came across a 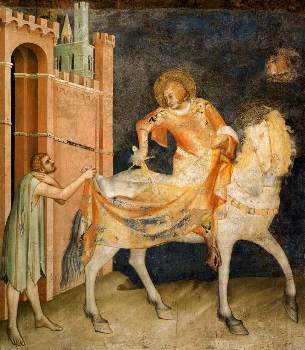 half-naked beggar.  Seeing that the poor beggar was shivering from the cold, Martino took pity on him, and cut his own cloak in half, giving one half to the beggar.  As soon as Martino set off again on his journey, the sun came out and the temperature became warm.  From this we get the "Estate di San Martino" – the Summer of San Martino.

That night, Martino dreamt of Jesus wearing his cloak, and woke up with his own cloak intact.   This sign made him rush off to be baptized and become a Christian.

Besides bringing us this wonderful warm November weather, San Martino has many chores as a patron saint of horseman and horses, of tailors and beggars, of the poor and injured, of barrel makers and drunks, of cured alcoholics, of betrayed husbands – I leave it to the reader to find a thread here.

And last but not least, San Martino is the patron saint of winemakers, grape pickers

and sommeliers, because on the occasion of San Martino’s feast day on Novembre 11, we drink vino novello, the new wine.

So whenever you taste the season’s new wine, raise your glass in a toast to San Martino.