The opening of the Cacioteca Regionale di Sicilia – the Sicilian Regional Cheese Consortium – is being celebrated during Cheese Art 2012, which includes two days of Tasting Workshops with traditional cheeses from around the world.

The Consortium works towards elevating the production of historic traditional cheeses to the status of “works of art.”  The idea is that great cheeses should be considered among Italy’s important cultural assets, holding a place beside the many works of art for which the country is famous. 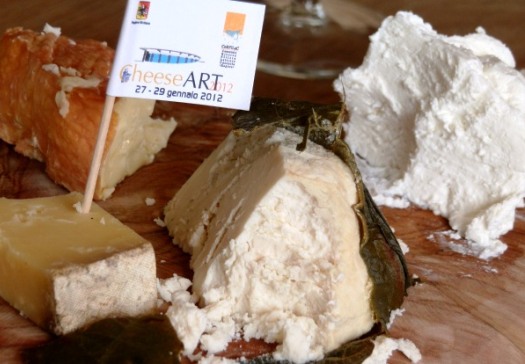 During Cheese Art 2012, cheese tastings will be available with various cheese boards paired with locally sourced cured meats (priced at 14-20 euro) or you can join in the Tasting Workshops on January 28 & 29, when traditional cheeses from around the world will be paired with Sicilian wines from Cerasuolo di Vittoria and Planeta, or beers from the Baladin microbrewery of Piedmont.  Cheesemaking demonstrations will take place during the course of the event – we know this is great fun, as we include it on our Eastern Sicily walking tour.

Here are the cheese tasting menus  in Italian, or check out the listing at the end for the 2012 Cheese Art Tasting Workshops and where they are.

Sunday January 29:
11.30 – 13.30 “Brunch Cheeselandia”
Brunch prepared by Accursio Craparo (chef of 1-star Michelin restaurant La Gazza Ladra  in Modica) and Corrado Assenza, the pastry chef of Caffè Sicilia in Noto, and will end with this cheese board:

Located at km 5 on the SP 25, the main road from Ragusa to Marina di Ragusa.
E-mail: [email protected]