To celebrate the Festa della Repubblica, the Feast of the Republic in Italy, a grand military parade is normally held in Rome, presided over by the President of the Republic, currently Giorgio Napolitano. In 2012, the military parade will be much more low key, as will all of the festivities, out of respect to the earthquake victims in Emilia Romagna, where tremors continue to damage homes, businesses and monuments, while spreading fear and economic ruin. (June 4, 2012 has been designated a national day of mourning in honor of the earthquake victims.) 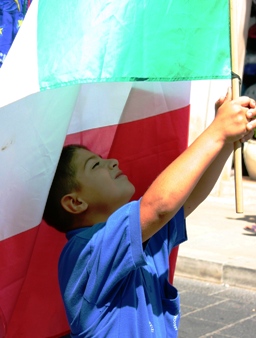 June 2 marks the Festa della Repubblica – Feast of the Republic – in Italy. The day commemorates a 1946 referendum in which the Italian people voted to decide their form of government — monarchy or republic — in a tense and chaotic climate following the end of Fascism and the Second World War. Though controversy about irregularities in counting the votes were numerous, Italy was declared a republic. After 85 years of reign the monarchy ended, and the members of the House of Savoy were exiled.

While Giorgio Napolitano called for national unity in honor of the day, Italy feels anything but united. Political squabbles are continuous, and scandals and muckraking are a nearly daily occurrence. Trust in political parties seems to be at a low point, while a technocrat government headed by appointed Prime Minister Mario Monti struggles to make badly needed reforms in Italy while being faced with unpopular austerity measures, a huge deficit, high unemployment and an economic recession.

I see a country in a fragile state of balance, and have the sense that Italians are scrambling in a free-for-all to grab what they can before the current government falls, or if it lasts until elections must be called in the spring of 2013, to at least shield oneself from the next blow.

Though this is hardly new, it is still painfully sad. During my 24 years in Italy, the only time Italy felt truly united was in 2006, when it won the soccer World Cup. At least for a few weeks the citizens of Italy were all proud to be Italian.

All that said, I’ll be celebrating just the same, with the hope that fervently believing in a united Republic is the first step to actually having one. Viva l’Italia!