“You’ll never have to worry that I’ll murder you and hide your body in a pit in the garden” he gasps, as he swigs down a liter of water.  Rather than a strange Sicilian declaration of love, this is a gardener’s realization that between wanting and having a garden there is a whole lot of backache.

After various attempts at planting things that dry up within minutes under the intense Sicilian sun, we have settled on a drought-resistant creeping rosemary to be planted in a neglected section of the garden.  We buy a dozen plants, and the next morning, I get up early to dig holes.  It is mid-April, but the earth is already baked dry. It looks like something from a drought-stricken desert, but with more rocks. 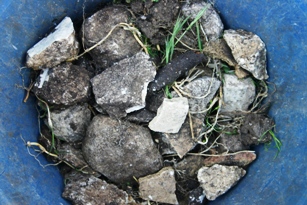 My first energetic lunge with the hoe knocks me off balance with the impact, and leaves a small dent in the earth and a much larger one on my self-image as a strong competent woman.  Another whack with a hoe hits a rock, and I spend 10 minutes wrestling the thing out.  By the time I have managed to dig one hole, I am breathing heavily and cursing, and by the third one, I’ve collected a bushel of rocks and crabgrass and am ready to break for lunch.

What ever possessed us to buy 12 of these damn things?  3 days of digging later, I have a crippling backache and barely enough strength to open the bottle of Ibuprofen.  But the rosemary plants are in and watered. Fingers crossed that they grow! 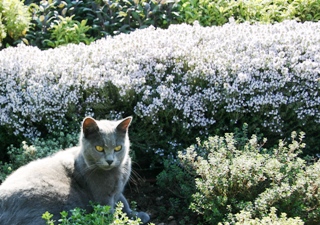 bble over to the part of the garden that is thriving, and gain strength as I admire the lavender in bloom and the hedge of thyme in a spectacular moment of blooming perfection.  A cat joins me to relax amongst the thyme, taking all our work for granted. A garden is not made overnight, I remind myself – we made this beautiful space from a plot of weeds. Then I limp back to the kitchen for a glass of wine. 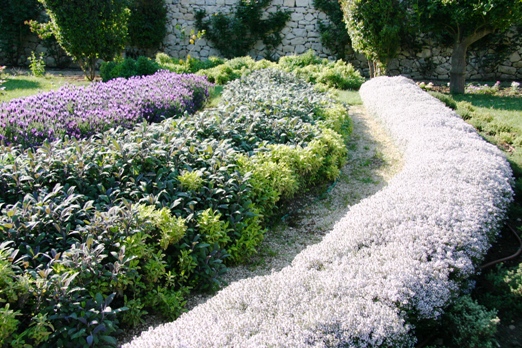