There are many patron saint festivals in Italy, but few can top the festival of San Sebastiano – St. Sebastian – in Sicily.

San Sebastiano is most often depicted as a young martyr tied to a post, wearing only a

loincloth, and bearing a strangely serene expression for someone who is stuck through with arrows.  Shooting him with arrows was actually the first attempt at killing him for his Christian beliefs, and after being nursed back to health, he went off to harangue the Roman emperor Diocletian for persecuting Christians, and was promptly clubbed to death.  So, a serene but belligerent martyr he was.

San Sebastiano is one of three patron saints in the Sicilian town of Palazzolo Acreide, about a 40 minute drive from where I  live in eastern Sicily.  I had heard much about this festival and finally the timing was right, so off I went with Emanuele & friends in tow.

The two most intriguing things about this festival are the “sciuta”, Sicilian for the “exit” or when the San Sebastiano statue on a gilded cart exits the church, carried on the shoulders of an army of men dressed in white and red.  I was told that there was much fanfare and it was “molto, molto bello.”   I’m used to the Sicilian’s fondness for exaggeration, and figured it would be similar to many festivals I had already seen.  Boy, was I wrong.

The second intriguing thing, that borders on the bizarre, is that little babies, who are often stripped naked – apparently this is to echo the nudity of San Sebastiano – are offered up to the saint’s statue as a kind of blessing to protect them.  The babies might wear a necklace bearing banknotes that are pinned to the outside of the cart, but donations of coins are also accepted.

Join in the celebrations as these pictures depict how the festival of San Sebastiano unfolds.

When first arriving in town, we are met with a line of bancarelle, stands selling an assortment of stuff, from straw hats to ward off the hot sun to cheap plastic toys made in China to entice the hoards of children into pestering their parents.  Sales are slow. 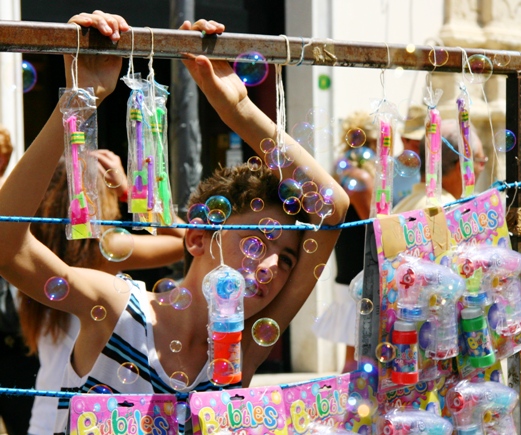 But we are looking for tradition and folklore, and soon we find it outside the church steps.  There is a cart selling cuddure, ring-shaped breads that celebrate the wheat harvest in August.  Bakeries donate these breads to the festival, and the money from purchases goes to finance the celebrations. 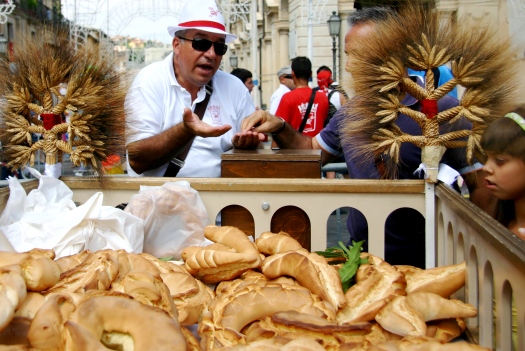 Soon a band starts playing and a parade starts, and the festive atmosphere heats up. 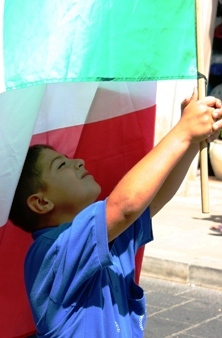 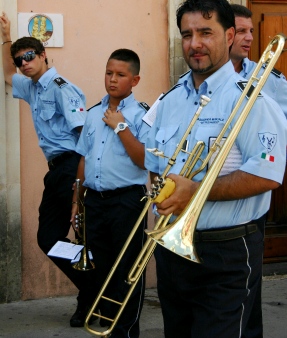 Finally a few loud firecrackers announce that the sciuta is happening soon, and everyone squeezes into the piazza in front of the church.  The sun is fierce and tensions are high – I argue with a tall guy who pushes in front of me, and he agrees to squat so that I can see over his head.  And then the sciuta begins.

The first moments of the sciuta are electrifying.  Some of the men who will help to carry the statue call out with arms raised exhorting San Sebastiano to come out of the church.  Just as the cart reaches the doorway a series of loud explosions are accompanied by violent sprays of ‘nzareddi, colored paper ribbons. 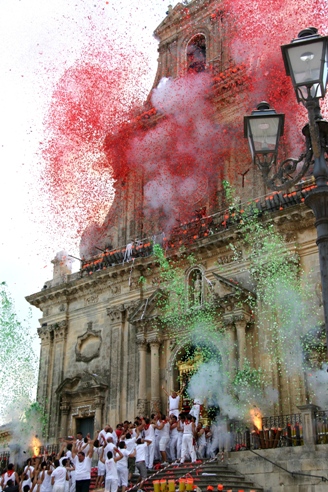 The continued explosions are deafening and the church is obscured in a swirl of colors and smoke, while people shout and raise their fists in the air.  I’m in the midst of a psychedelic bombardment, and as the crowd surges forward, I lose Emanuele in a whirl of colors. My heart is pounding,  my hands are shaking and it’s hard to keep the camera still. 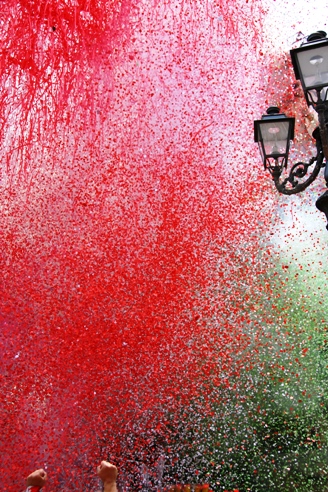 Finally the colors part, the smoke clears and we can see the cart of San Sebastiano! 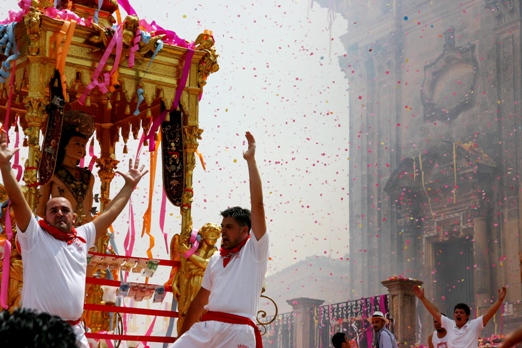 I follow the cart as it is carried through the town, and babies are held up to receive the blessings of San Sebastiano, who becomes their protector.  Sometimes the babies are stripped naked, mimicking the nudity of the saint.  As they are lifted up to the heavens, the crowd rejoices, Viva San Sebastiano!  I’m swept up in the soaring energy. 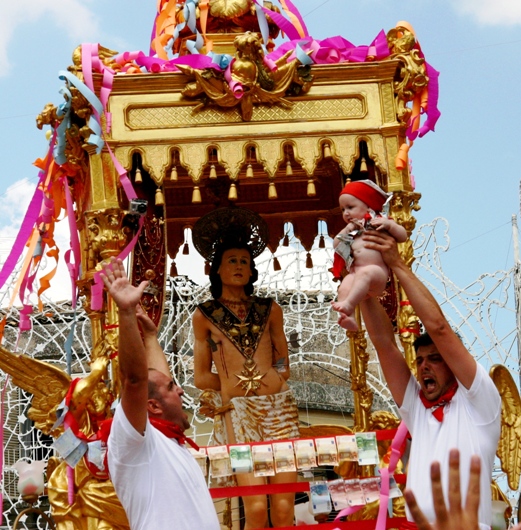 Not all the babies are as thrilled as the spectators.   I almost feel like crying, too. 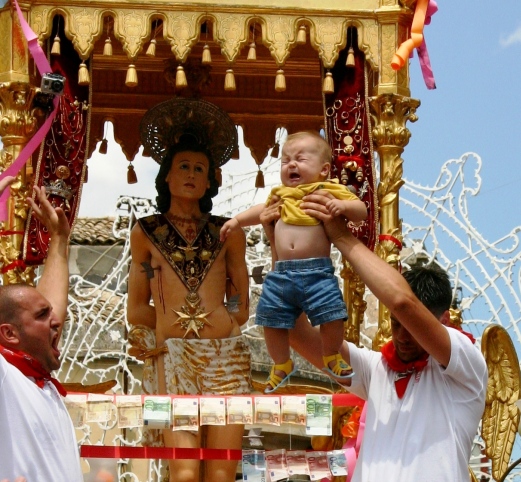 As the statue of San Sebastiano heads down a side street, the piazza is suddenly overrrun with children frolicking in the ribbons of paper, while a priest and other devotees walk solemnly through the riot of colors.  A few diligent workers are busily dumping buckets of water on little fires that have sprung up in the paper ribbons. 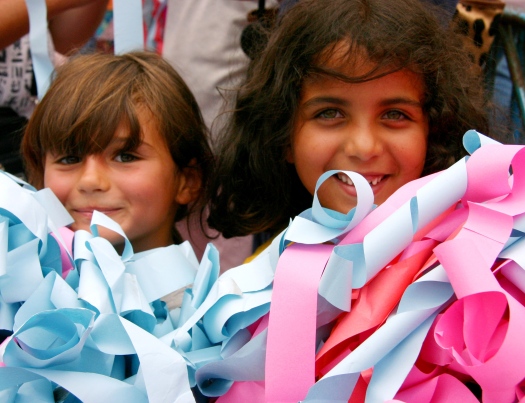 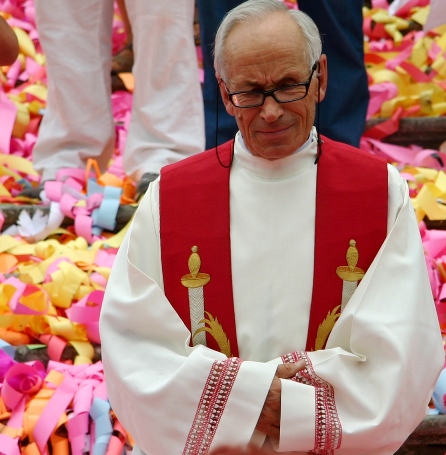 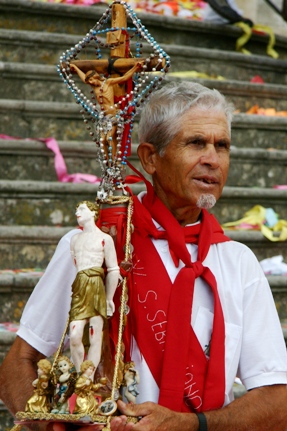 All in all it was one of the most emotional patron saint celebrations I’ve witnessed in Italy, an exuberant but exhausting experience. 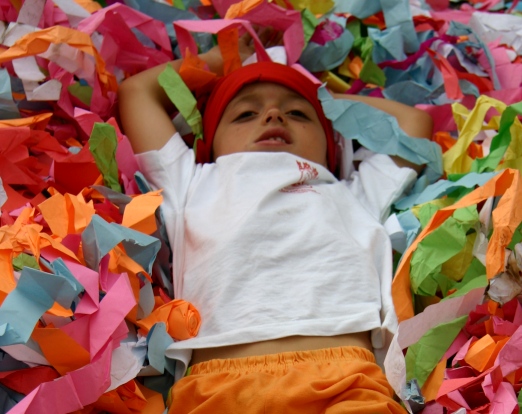 I find Emanuele & friends, and babbling excitedly like children, we head off to lunch.

The festival of San Sebastiano takes place on August 10 in Palazzolo Acreide in eastern Sicily, but other festivities go on for a week.   Check the website for a calendar of events.