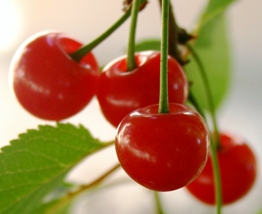 , it’s impossible to say no – refusing free food is simply not done. I had already been through this last year, when my sister-in-law Elisa announced that I MUST come and pick sour cherries from her tree.  Being the first time I had done this, I enthusiastically picked kilos of amarene, then much less enthusiastically pitted them, and made lots of sour cherry jam and a crostata.  This meant slaving over a hot stove for hours, and then baking, so that the house didn’t cool off again until September. Frankly, it was not an activity I wished to repeat on a blazing hot summer day.

After the third urgent phone call from Elisa it seemed that it would now be my fault if the amarene cherries just rotted on the tree – I did not ask who had been picking the cherries for years beforehand – and that barring a fatal disease, I had no choice but to pick.  With the hopes of not being stuck with too many cherries, I invited my neighbor Beatrice to go picking with me, as she had suggested that we make sour cherry syrup.  Other than accidentally spilling half a bucket of cherries in the dirt (which I immediately hid under more dirt), our picking went smoothly. 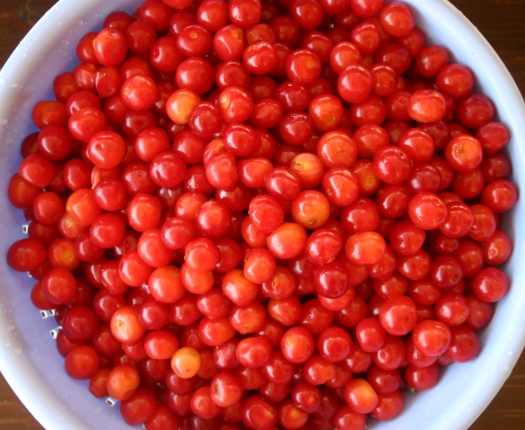 Sour cherry syrup makes a delicious cherry soda, and was traditionally served in summer in Italy with a generous squirt of seltzer – nowadays we use sparkling water.  Getting a few cherries in the glass made it more fun, so you had a spoon to go along with it.  Or kiosks in cities like Rome would serve a grattachecca – shaved ice, done right before your eyes from a big block of ice – with the sour cherry syrup poured over it, a sort of old-fashioned snow cone.  I liked the idea of having sour cherry syrup on hand for a refreshing summer drink that is not too sweet.  Plus, I’d get points with the relatives.

So, I ask a neighbor, and another relative, about the best way to make sour cherry syrup, and soon phone lines are buzzing with advice.  Even something as simple as syrup manages to stir up a controversy in Italy. Lidia tells me to mix the pitted amarene cherries with sugar and leave them in the sun for 2 days, then boil for 10 minutes.  That’s the way her mother did it – she was Sicilian, and they seem to have a thing for putting things out in the sun to dry: tomatoes, black olives, figs, underwear.

My neighbor Beatrice consulted her friend Laura, who she claims is a whiz at anything 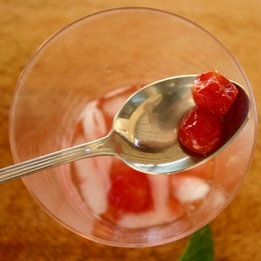 sweet, and Laura said to simmer the cherries with sugar for 20 minutes, and not a minute longer.  She is Sicilian, and never mentioned the sun.

Still another neighbor suggested that to avoid the nuisance of pitting the amarene, they should be tied up in cheesecloth bags, pits and all, and simmered in a sugar syrup.  Upon further quizzing I eventually managed to extract an idea of proportions – how many cherries to how much sugar – as I scribbled furiously.

I decided to try the cherries in the sun method for no other reason than I will definitely run into Lidia at family gatherings, and she is bound to pester me about this – plus it was a scorching hot day, so why not put that sun to good use. 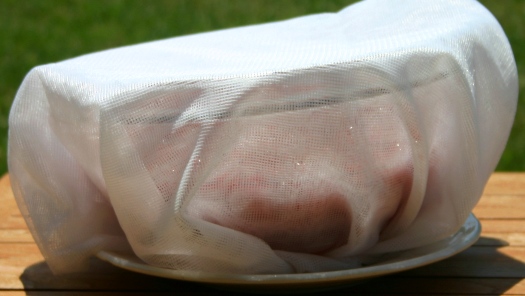 I  also tried Laura’s method of simmering for 20 minutes, and just because I couldn’t stand pitting another cherry, the unpitted sour cherries in cheesecloth method came last.

At the end of all this research, feeling slightly ill from having drunk an enormous quantity of sour cherry syrup, the Amarene Awards were officially bestowed:

First prize goes to the cherries-in-the-sun method.  Flavor was superb – intense cherry with a tart finish – and the whole cherries tended to stay round and plump. Beautiful red color was slightly brighter.

Coming in a close second was Laura’s simmer-for-20-minutes method.  The flavor seemed nearly identical to the sun method, though the cherries were a bit more broken apart due to the longer cooking time, and a bit less red.

A distant third was the non-pitting cheesecloth method, which apart from having a less intense cherry flavor, also did not have any whole cherries in the syrup, and fishing the whole tart cherries out of the glass is half the fun of drinking the stuff.  Easy, but not worth repeating. 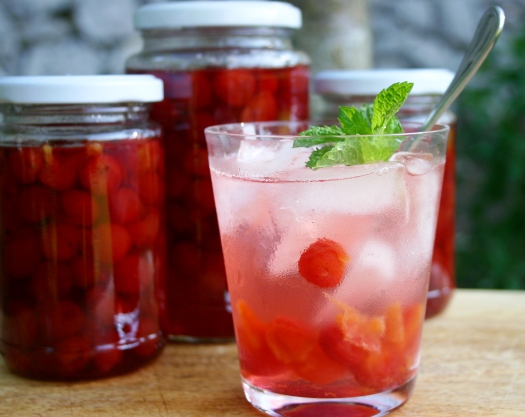 Below you’ll find my 2 recipes for preparing sour cherry syrup or sciroppo di amarene with whole cherries.  If you can stand to read any more about sour cherries, you might like:

or go off in another direction:

History of a Sicilian Biscuit