I am asleep in a tiny farmhouse on the top of hill in the middle of postcard-perfect Tuscany, the scent of lavender floating in the air, when suddenly I am awakened by the sound of a loud motor and the stench of diesel fumes wafting 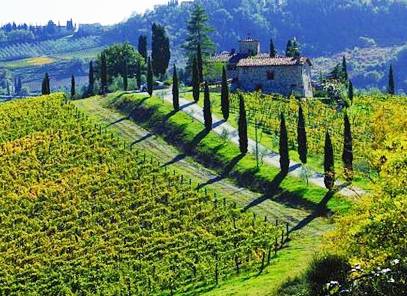 into my bedroom.  I stumble to the window to see what is disturbing my little corner of paradise. There is a backhoe down in the driveway.  The driver leaps out of the cab, and flips back his long sun-bleached hair.  He’s wearing a pair of tiny shorts made from a scrap of denim, and his well-toned muscles are bulging from a torn shirt. He appears to be Tarzan with a driving license.  “Buongiorno,” he shouts up to me. “I’m here to look for il pozzo nero – the black well.

It all started a week ago, when I noticed a brown smelly liquid oozing out from under an iron grate a few feet from my front door. My corner of this farmhouse was restored before I moved in, so I know only the basics of the working of its plumbing system.  For instance, when I flush the toilet, the water goes away, into the ominous sounding black well.  Before the oozing started, the black well was hardly a focus of my life, but that’s about to change.

At least I do know the location of the pozzo nero, since it was pointed out to me when I moved in by Vasco, who owns the house behind me and shares this same pozzo nero.  When Vasco showed me its location, next to a newly planted rosemary bush, he took a rock and scraped an X onto the top of the stone wall, to mark the spot.  That was 2 years ago.  Since then the rosemary has grown to be huge, along with the nearby lavender and fig tree.  They all seem to like living in proximity to the black well.

When I phone Vasco to discuss the smelly brown liquid, I ask, “Could the pozzo nero be full?”  “Impossibile” he  says.  Vasco explains that it is a kind of system that decomposes and assures me that “it never needs to be emptied.”   “Mai?” I ask suspiciously.  “No, never,” he insists, and comes to take a look.

Vasco surveys the garden and his gaze falls upon my beautiful lavender in full bloom. “It is most likely the roots of this 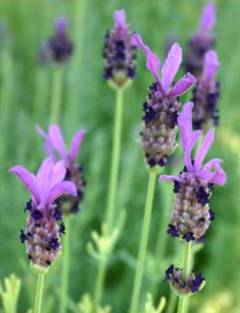 lavender that you planted” he says accusingly.   I tell Vasco that he showed me the location of the black well when I moved in, and it was just to the right of the rosemary bush, and that he marked it with a scraped X.  “Non ti ricordi?”    He looks at me as if I have just made up a preposterous lie.  “No,” he says, he does not recall this.  To prove my point, I ask Vasco to lift the rosemary branches, and I crawl under them, searching for his scraped marking, which not surprisingly, I do not find.   I crawl back out, smelling like the preparations for a roast chicken. “Sicuramente it’s your lavender bush”, he says, jabbing a finger into my forearm.  He shakes his head. “I’ll have to call for help.”

Help turns out to be Tarzan.  Vasco directs Tarzan to where he believes the posso nero is located, underneath the culprit lavender.  The back hoe’s claw takes a big bite out of the earth and pulls up my beautiful lavender bush, breaking the thick roots at their base.  This is the first, but not the last casualty of Tarzan and Vasco’s campaign.  When they find no pipe there, never mind a clogged one, I helpfully suggest that the pozzo nero is near the rosemary bush. Tarzan shakes his head and says “No, it’s not in line with the other pipes.”  “Oh”, I say, encouraged by this observation, “do you have a copy of the plumbing plans?”  Tarzan looks at me like he has just noticed that I am a strange alien being.  “Ah,” he chuckles, “a lot of foreigners ask for those.”

Next they decide to dig around the base of the fig tree, crushing and discarding my iris bulbs.  Niente – nothing. Another idea occurs to Vasco, and they dig a rectangular ditch in the lawn, to see if they can find a cross section of piping.  Niente.  Then Vasco remembers that they had to put a lot of extra dirt on top of this lawn area to level it out, so he suggests they dig deeper.  Niente.  The ditch looks like a tomb.  Tarzan piles the dirt roughly back in the tomb, so it has a mound on top.  I wonder if I could pass it off as Etruscan and charge admission.

It’s a mystery.  Vasco and Tarzan scratch their heads and wonder what to do next.  Before they decide to knock the house down, I sweetly ask, if, just to be nice and humor a strange foreigner, they could dig by the rosemary bush.  Tarzan shrugs and acquiesces. After all, he’s there to dig.  The metal claw hits the dirt and immediately a loud clang resounds – it’s the cover of the black well, which was apparently quite close to the surface.   Tarzan removes the cover and an overwhelming stench sends me into a gagging fit.  “It’s full” he pronounces. Tarzan replaces the cover, swings back into the cab, and drives away in a surge of diesel fumes.

Vasco says I need to call a spurgo.  This is a new word for me, so I first look in the dictionary.  I learn that the verb spurgare means to purge, to bleed, to expectorate, while the reflexive verb spurgarsi, means to clear one’s throat and spit.  I decide to consult the Yellow Pages instead.  There are a surprising number of listings for “Spurgo Pozzi Neri”, a service for the emptying and cleaning of black wells.  I call most of them before I find one open in August.

The spurgo service man arrives on the hottest day of the year at high noon, with the August sun beating down like a 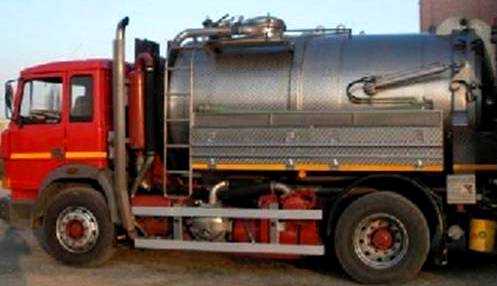 merciless tyrant. He has a truck with a big tank and a machine that sucks up the contents of the black well. I barricade myself inside, with all the windows shut against the roar of the machinery, the heat, and the unbearable stench.  Finally the motor cuts off and I hear a voice calling “Signora! Signora!” I venture outside, trying not to breathe through my nose, where I find Spurgo-man covered with sweat and asking for water.  I give him a tall glass of cool mineral water, which he gulps down like a man lost in the desert.  He plunks down the glass, and informs me that the pipes leading into the house need to be cleaned out or nothing will work right. It seems they are partially blocked with “residue”.  “It’s necessary to use pressure” he says.  He tells me he has the equipment, and  will do this right away if I give him another glass of water.  I give him the bottle.

I am back inside when the motor roars into action and then I hear a loud gushing sound coming from the bathroom. Curious, I open the bathroom door and find a shit-geyser shooting up from the toilet and spewing across the walls.  Apparently the toilet has decided to clear its throat and spit the  “residue” all over the bathroom.

I scream in horror and rush outside yelling “fermo! fermo!” to Spurgo-man who is happily engrossed in his pressure machine.  He does not hear me until I am next to him tugging on his sleeve, which I nearly rip off.  “Stop, stop, fermo fermo, it’s spraying out all over the bathroom”, I plead frantically, aware that I am hopping up and down.  Spurgo-man shuts off the machine and simply replies  “Allora, I said it was necessary to use pressure”.  I must have looked like I was capable of murder, as he says he’s finished anyway.  He quickly packs up his equipment, puts the cover back on the black well, and asks me where to leave the bill.  Before I can tell Spurgo-man to shove it up his culo, he lays the bill on the stone wall and drives away.

I, too, want to drive away, and never return.  Why not?  Everyone else is doing it.  I could just drive away and keep going, never looking back.  I sit in the shade drinking a bottle of water while I mull over this appealing idea, and then realize that I have to pee, but can’t use the residue-covered bathroom.  I walk into the vineyards and squat behind a grapevine, wondering if I will lend a special flavor to this year’s Chianti.

In the end, I decide to stay. After all, there are the cats to think about.  I mix up a deadly concoction of bleach and 3 kinds of floor cleaner, pull on some rubber gloves, and madly scrub until I have the cleanest bathroom in Chianti.  Then I say a little prayer to the patron saint of plumbers, and flush the toilet. The water goes away, down into the pipes, across my front garden, past the Etruscan tomb, and just to the right of the rosemary bush, it settles down into the black well.