Farmer Mario, who tends one of our fields, is outside with the engine of his tractor rumbling.  This winter the field was left fallow, so that by May, it’s a huge tangle of shoulder high wildflowers, grasses, and let’s face it, weeds.  It’s time to cut.

Our farmer friend is accompanied by 2 of his young sons, who unlike other teenagers who zip around on Vespas, seem to love driving agricultural machines.  They take turns cutting, and warning each other of big rocks looming beneath the vegetation. The cut grasses are left to dry “for as long as it takes” says Mario, as they all drive away with a wave.

After however long it takes passes, another piece of equipment shows up which gathers the dried grasses in long rows, 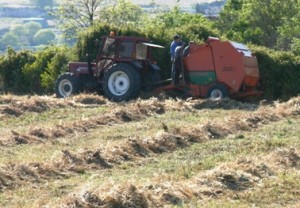 ready for the baling machine, which arrives a few days later. The baling machine comes with a couple of other people I have never met, because it usually breaks down once or twice and they know how to fix it, so another day passes before this phase is finally done.  In the meantime, Emanuele watches from the window, and bets me a dinner for guessing the number of bales that will be made.  I come closest to the 6, and look forward to choosing an expensive restaurant.

All the while, Mario is thinking differently. He’s got 40 cows and 100 sheep to feed, along with a brood of 8 kids.  These 6 hay bales will come in handy. 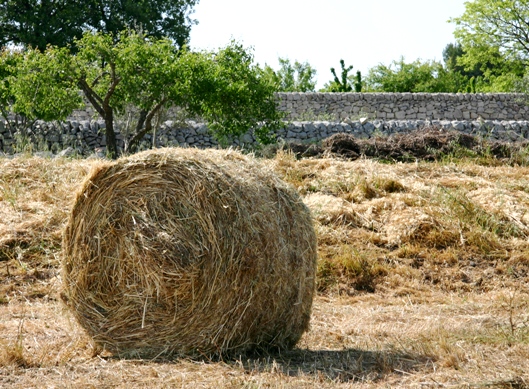 Mario treats us a bit like curious bystanders, assuming we know nothing about farming, which is essentially true.  We grow useless things like roses and geraniums. We have handed this field over to a farmer because we are not farmers, and have no equipment that breaks down or not. We shook hands, and no money is exchanged. Mario rarely phones before coming – then is surprised and a little offended if he finds us gone and the gate locked, as if we have purposely shut him out.  I guess on a real farm, someone is always home.

Mario does not feel the need to communicate with us about what he is doing with this field – one year he plants hay, the next wheat.  When I ask him why he replies “Do you eat the same thing every day? No? Well, the earth is the same way.”   But that was before the cheese.

“Signora, Signora!” I hear a voice shouting outside.  I open the front door to find Mario smiling shyly, and clutching a plastic bag.  “Una cosa per voi” – something for you, he says.   I hesitate – the last time he gave us a gift it was a freshly butchered goat – and am relieved to find that inside the bag is a huge caciocavallo cheese.  It must weigh 15 lbs.  “Bellissimo”  I say, quite pleased, while realizing that now we will be eating the same thing every day.

I stick my head into the bag with the cheese and inhale deeply – it smells like warm milk, overripe fruit, and sweaty feet.  I suppress a gag, and quickly come up for air.  I politely try to conjure up a pleased expression on my face, as Mario beams.  It’s better than goat, I remind myself.

Caciocavallo cheese in Modica, Sicily is made from cow’s milk, and the cows graze on rough pastures of spontaneous forage, otherwise known as weeds. It is one of Sicily’s oldest cheeses, and historical records note that it was exempt from tax back in the late 1400’s during the reign of Ferdinand II,  who apparently had a benevolent moment in the midst of the Spanish Inquisition.  It is traditionally worked with wooden utensils, before being shaped in a rectangular wooden mold stamped with the producer’s name, and finally brined in salt water.  It can be eaten fresh or aged for up to a year. The term caciocavallo – cheese on horseback – comes from the practice of tying a rope around the middle of 2 rectangular cheeses, then hanging them over a beam to age – reminiscent of being astride a horse. 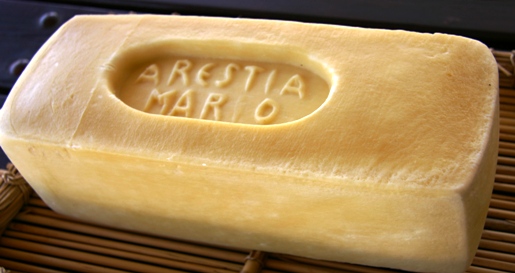 The appearance of Mario’s  caciocavallo  is definitely handmade, with the “i” from his name barely visible, so it looks like “Mar o.”  Our first taste of “Mar o’s” caciocavallo is a bit disappointing, as we find it overly salty.  We plot about 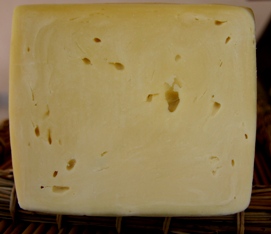 offloading a hunk to various people – Emanuele’s sister, a neighbor, my hairdresser.  We wonder if we keep it in a cool place to age, it will lose some of its saltiness, but don’t relish the idea of sharing a closet with it.  We cut the cheese in half and find the center to be pale and soft, with  a pleasantly grassy aroma – the sweaty sock syndrome seems to have disappeared – and a good nutty taste. By now it seems a lot less salty, or maybe that’s because we’ve eaten so much of it we can’t tell any more.  In any case, weeds for cheese is not a bad deal.

If you’d like to see firsthand what’s happening on our non-farm, book a 1-day tour in Sicily, or explore the area in depth on our Walking & Cooking in Eastern Sicily tour.

2 thoughts on “Weeds for Cheese – Bartering Caciocavallo In Sicily”