The mandrake plant is a lovely autumn wildflower, but watch out.  Besides being poisonous, it’s said to possess strange and mystical powers.

My favorite mandrake myth is that the plant emits a horrible shriek when uprooted, causing madness and death to those foolish enough to have dug it up.  To solve this, medieval sorcerers advised that a dog should be used to uproot the mandrake plant, by tying a cord around the plant and the other end to the dog’s tail –  then the root collector makes a run for it.  The dog would die upon hearing the shriek, but the collector would be safely out of earshot.  I guess the idea of being man’s best friend is a one way street.

The root of the mandrake plant is said to resemble the human form, and in medieval times the root was highly valued as a magical talisman, endowing its owner with supernatural powers. I’ve seen the mandrake plant in bloom many times during my wildflower walks in Sicily, and enjoyed the bright purple blossoms.  But I’d never seen the root. 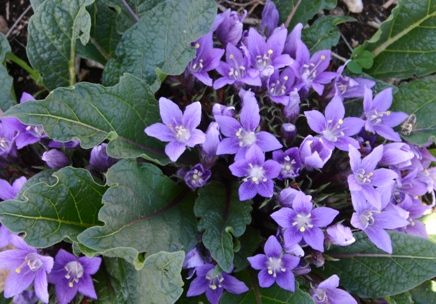 On my way home recently, I spied a mandrake plant in bloom at the edge of the village and was curious to see the human shape of the root, and decided to dig it up.   I also liked the idea of being endowed with supernatural powers.  Armed with a spade, rubber gloves, and my camera, I briefly thought about wearing earmuffs, but decided it was too hot, and too strange – I must keep up appearances in the neighborhood.  Anyway, if I really believed that deadly shriek story, I’d just enlist the “help” of my neighbor’s odious dog, whose most endearing trait is barking incessantly from sunset to dawn.

After digging for a few minutes, I had unearthed 3 inches of mud and gotten to the top of 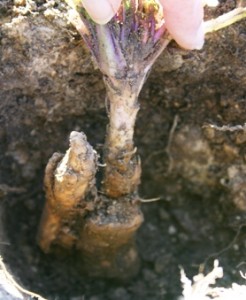 the thick root, which was, quite literally, firmly rooted.  After I’d dug down 6 inches, encountering several rocks along the way, I’d ripped holes in my rubber gloves, gashed my thumb and had thick mud oozing from under my fingernails. I was sweating profusely and my legs ached from squatting.  It was time to yank.

I positioned my feet on either side of the plant, gripped the top of the mandrake root with both hands and yanked with all my might.  There was a loud snap, followed by a piercing shriek – mine – as I fell over backwards in the mud, clutching the upper half of the mandrake root.

So much for appearances.

The mandrake root may or may not have a shape that resembles the human form, but I 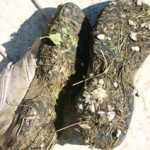 know longer cared.  My hopes for becoming an Italian Harry Potter dashed, I hobbled home to change my clothes, leaving my muddy shoes to dry in the sun.

Where to find the mandrake plant in bloom:

The mandrake plant (mandragora autumnalis) blooms from September to December in the south of Italy.  When walking in Sicily, it can commonly be found along the rocky seaside path at the Vendicari coastal reserve.

Read similar stories:  Antipasto: Delivering a Goat in Tuscany  or head further south and learn How Not to Restore a House in Sicily

12 thoughts on “Wildflowers in Italy – The Magical Mandrake Plant”