On our Maremma tour, we do not go to the chic resort area of the Antinori and Alain Ducasse set- which, in my opinion, has little to do with the real Maremma, plus the flat countryside is uninspiring for the walker. I prefer the hilly coastal area of the Maremma regional park (also known as Parco dell’Uccellina) with its stunning pristine coast, and the wonderfully mysterious Etruscan sites further inland. 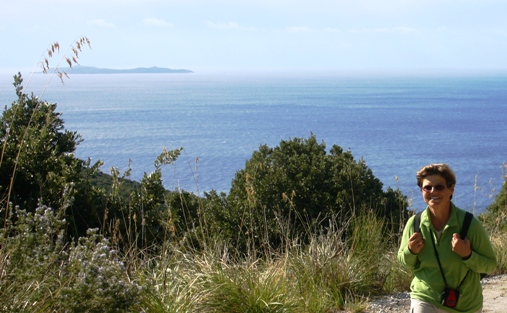 Everyone on our walking tour in the Maremma was amazed at the Etruscan city of Vulci, which was later occupied by the Romans, and contains the remains of a perfectly preserved stretch of Roman road and spooky frescoed tombs.  This is a place rarely mentioned in travel magazines yet was a highlight of our tour.  It is just over the Tuscan border, in the region of Lazio. 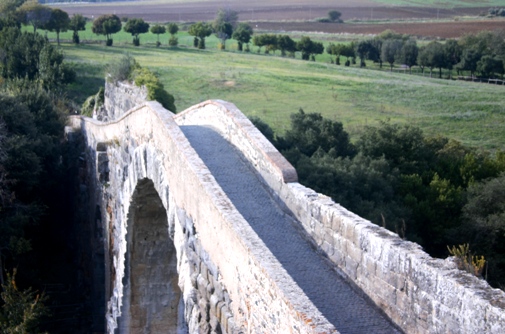 The walk along the Etruscan byways carved into the rock near the hill town of Pitigliano was lots of fun, along with sampling the sweets from a Kosher bakery in the old Jewish quarter. 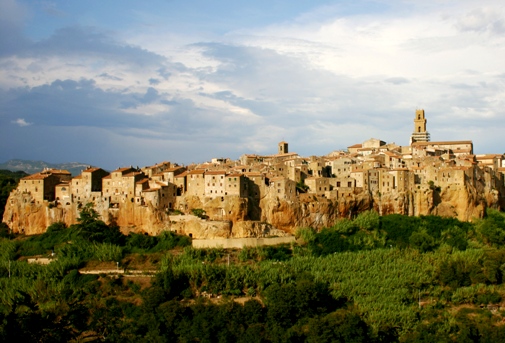 The coastal walks in the Parco dell’Uccellina rank among my favorite walks in Tuscany, perhaps because I first visited the park back in 1988 a few months after I had moved to Italy, when everything was a new adventure.  I took a dawn train from Florence, then deciphered the bus schedule in order to get to the park, did a long hike and then sprinted for the bus to connect to the last train back to Florence.  You don’t have to worry about any of that on our walking tour! Instead you’ll wander through pink heather and wild rosemary (okay, you’ll pant for a while uphill)  and end up at Tuscany’s loveliest beach, where you can cool your feet in the turquoise sea. 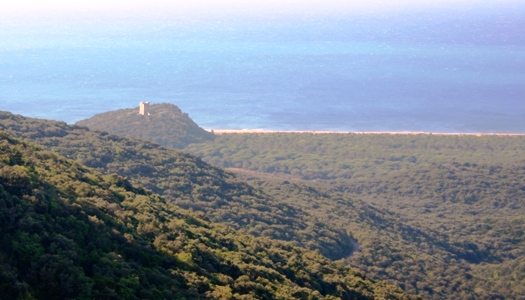 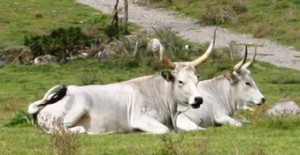 Europe, and it can only be visited on foot. Within the park there are several watchtowers dating from the 11th to the 16th century, an enormous variety of Mediterranean plants, as well as cultivated olive groves and a few areas of pasture favored by the local maremmana cow, an impressive beast with alarming horns.

The maremmana cow is often only encountered in restaurants, in the form of bistecca – a thick T-bone steak served rare.  I had a fabulous bistecca grilled over an open fire at the Trattoria Verdiana near Montemerano.

The next day we had a cooking lesson in the kitchen with the simpaticissima cook, where we learned to shape 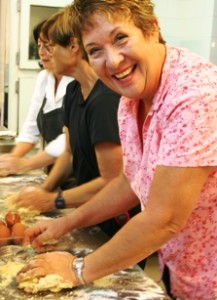 homemade pasta and make zuppa di pane – a bread soup with greens we picked from her garden.

Aside from the Saturnia spa, with it’s sulfur hot springs (and accompanying odor) the country towns of la Maremma are relatively free of tourists, yet full of intriguing sites and fascinating walks.  Join us for an off-the beaten path walking tour in southern Tuscany’s Maremma, and experience idyllic coastal walking and lots more.