Sicily often conjures up images of beaches and suntans, but once had a great reputation for ice.

Gathering snow and compacting it into ice has been done for centuries, and Sicily’s high mountains provided ice not only for its hot coastal cities, but was shipped as far as Tunisia and Malta.

On the flat top of Monte Lauro, an extinct volcano nearly a 1000 meters high in the Monti Iblei, there are 25 neviere – 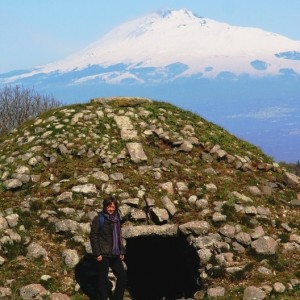 snow huts – that stand in testament to the once-thriving ice industry, when gathering snow to make ice was big business.  From the 15th to the 19th century these neviere supplied ice to Buccheri and other neighboring towns, as well as half the ice for the entire city of Syracuse.

The neviere were built in a few different shapes, with the majority of the structure being beneath the earth.  The most common shape is the “cupola”, built as a deep stone cylinder underground, topped with a visible cupola. Snow was gathered within a limited area called a “zàccanu” (most often owned by a noble family and occasionally, the Catholic church), which was enclosed by a low stone wall. When it snowed, a bell would be rung in the town, and anyone willing to work for a few cents would gather in the cold night to roll the snow towards the neviera, then pack it into 100 kilo layers that were separated by straw, which served as both insulation and to mark a section that would be later cut as ice in the summer months.

Used for protecting food from spoilage as well as making cooling sorbets with lemon and salt in the hot summer, the ice was also used as a medicinal remedy for a high fever, when doctors would prescribe “la cura di lu friddu”, the cold cure, which involved packing the patient in ice – survivors definitely had no fever.

While no longer in use, the fine craftsmanship of the neviere is lovely to behold.  I love to see them in winter when the skies are clearest and the snow-capped Mt. Etna volcano appears as a backdrop – a stunning sight!  You may have to clamber over a few barbed wire fences and dodge some feisty cows, but the neviere of Monte Lauro are worth a visit.  When feasible, I take visitors to this area, particularly on a walking tour in eastern Sicily. 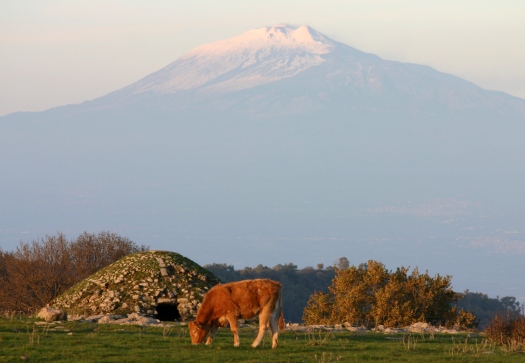