There is a lot of waiting involved in seeing the Easter procession called La Madonna che Scappa in Piazza – The Madonna who Flees across the Piazza – but in the end, it’s worth it. It’s held in the town of Sulmona in Abruzzo, which is worth a visit in itself, and is definitely off the regular tourist radar.

The main piazza of Sulmona is huge, and is graced by a magnificent 13th century aqueduct with 21 arches.  On this Easter Sunday, it’s cold and damp, so I join the locals huddled in the bar drinking foamy cups of cappuccino. It’s also

an excuse to sample Sulmona’s sweet almond confetti.  While there are cute confetti made into flower designs – in colors not normally reserved for food in my opinion – I opt for the plain white sugared almonds.  I buy a little bag tied with a bright purple bow, and enjoy crunching on them as I wait in the piazza.  The wait was longer than I had expected, and I soon wished I’d bought a bigger bag.

I pass the time by asking people about the procession, and try to get a consensus as to the best place to stand for a good view, while the piazza fills up with thousands of people and I soon have little choice but to stay where I am.  At last there is some movement, as the statues of St. Peter and St. John are slowly carried through the streets. They stop outside the church where the Madonna had been 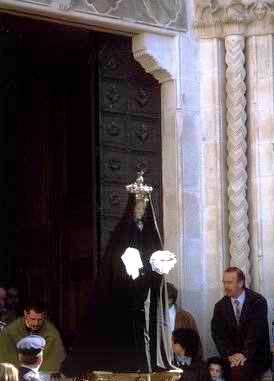 in mourning since receiving the news of her son’s death on Good Friday.

St . John goes to the door of the church – his job is to convince the Madonna that her son has risen from the dead, and have her come out of the church to be reunited.  The Madonna does not believe it.  A member of the procession goes to the door and knocks, but he is also turned away.  Then Peter tries his hand – but the locals say he has a reputation for being a liar – so naturally, the Madonna does not fall for his preposterous story.   By this time I am glad of the warmth that the crowd is providing on this cold drizzly morning, but wish that the Madonna were more easily convinced.

St. John tries again, and whatever he says works this time, as the statue of the Madonna appears at the door of the church, supported by long beams carried on the shoulders of men dressed in green cloaks.  She indeed looks sad, draped from head to toe in a black cloak, with a white lace handkerchief in one hand.

The two Apostles now follow the Madonna, in a slow reluctant shuffle, gradually approaching the fountain in the center of the piazza.  The atmosphere is tense and quiet, the air filled with expectation.

All at once, the apostles stop, and the Madonna sees the statue of the Risen Christ at the far side of the piazza.  He’s the guy standing on a pedestal underneath crimson draping in the center arch of the aqueduct, his gold halo shining, so kind of hard to miss.

There are a few long seconds when the Madonna is still.  Then, in an amazing feat of engineering, the Madonna’s black cloak falls to the ground, revealing a splendid green dress embroidered in gold, the white kerchief now replaced by a red rose clutched in her hand, while 12 white doves fly into the air, the band begins to play, fireworks explode and the crowd parts – the men shouldering the statue break into a run, causing the Madonna to flee across the piazza until she is face to face with her son. Hallelujah!  I applaud along with the crowd, overcome with the excitement of the moment, and grin at the woman next to me.  In her amazement, she exclaims “Guarda, la Madonna is blond!” 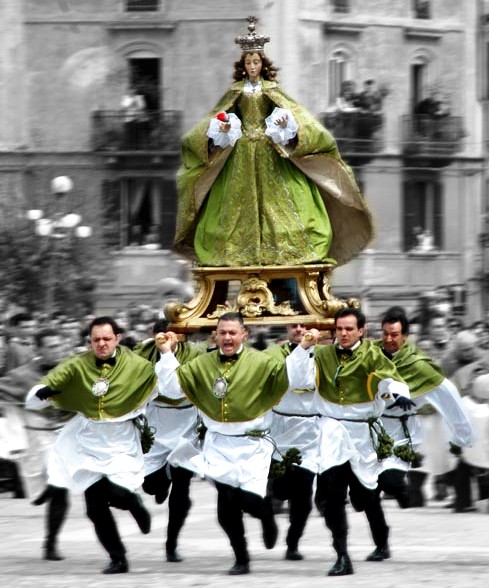 Near where I live in Modica, Sicily, we have the Easter procession called La Madonna Vasa Vasa, the last 2 words being Sicilian for “Kiss Kiss.”   The same theme of the Madonna being reunited with her son is present, but with none of the rushing about. This also takes place on Easter Sunday, when the statue of the Madonna, dressed in black mourning, is carried in a procession through the main street of town.  When she sees the statue of the risen Christ, the Madonna – who has wonderful movable arms – throws off her mourning cloak from which white doves are released.  Then the crucial kiss- kiss moment takes place, when she embraces her son to wild applause and firecrackers.  In the meantime, tradition has it that local farmers are keeping a sharp eye on the direction that the doves fly, indicating whether or not they can expect an abundant harvest, kiss kiss or not.