Before there were televisions and computer games, kids played outdoors, often scrounging materials to make homemade toys for street games.  The post war years in Italy were lean times, so the Italian culture of street games was widespread, with the favorite item being a carretto – a rudimentary go-kart.

Last Sunday, May 23, a celebration of Italian street games took place in Ragusa Ibla, where wooden tops, marbles, and games made from bicycle rims were played in the streets, but the focus was on what is locally known as u calacipitu, a rough and ready hand-built go-kart.

Emanuele enthusiastically dragged me along to this event, thrilled at recalling his childhood escapades in Ragusa Sicily, where the steep streets were the perfect place for reckless kids to test out their go-karts, known in Sicilian dialect as i calacipiti.   When I wanted to stop and learn how to use a truppiettu – wooden top – he scoffed.  Simply not dangerous enough.  Emanuele then lectured me on the vital importance of 3 calacipitu facts:

1. It must be made with found or filched materials
2. It must be dangerous, so it must not have brakes (use your feet)
3. It must make a lot of noise 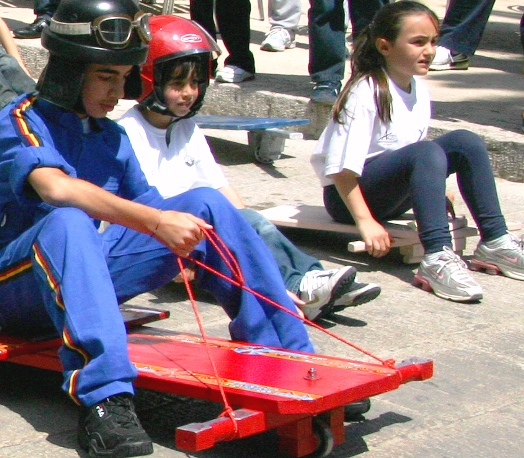 There were plenty of grown-ups as excited as the kids, and some calacipiti were decked out with high tech gadgets or made in a fanciful butterfly shape to delight a small child.  I admired one boy’s elaborately painted calcipitu, and when I asked him if he had done it himself, he said that his uncle, a Sicilian cart painter, had helped him with the design. It included a riddle – miniminagghia – in Sicilan dialect:

“I’ve got a buggy that’s lots of fun, it seems like a tank but without the guns,
when it passes it makes my grandma jump & the whole street tremble… what is it?” 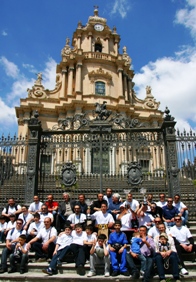 bearings of an old truck and bits of a wooden ironing board – while being decorated with a couple of horseshoes for good luck.  After the judging, trophy awards and group photos in front of the church were dispensed with, the event culminated in a calacipitu parade through the town.  There were a surprising number of grown men in the parade, apparently embracing the idea that you can stay immature indefinitely.

Little of the danger of Emanuele’s youth was present, as many kids wore helmets, but of course, this is while their parents were watching. But to Emanuele’s great satisfaction the calacipiti all made plenty of noise.  In fact, the rest of the morning in town, heads would turn and grannies would jump when they heard a calacipitu coming their way.  And the whole town trembled.